Worth the Fight by Vi Keeland ~ Blog Tour and Giveaway 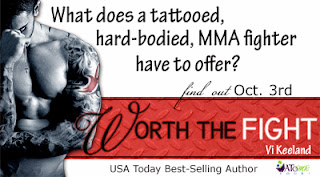 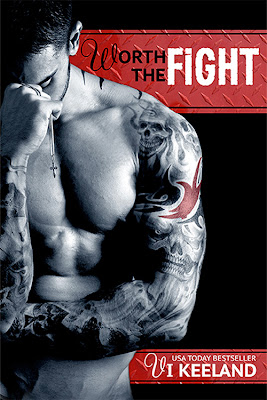 Title: Worth the Fight

It didn’t matter that the ref called it a clean hit. Nico Hunter would never be the same.

Elle has a good life. A job she loves, a great apartment, and the guy she’s been dating for more than two years is a catch and a half. But it’s boring…and she strives to keep it that way. Too many emotions are dangerous. Her own past is living proof of what can happen when you lose control.

Then Nico walks into Elle’s office and everything changes…for both of them. But what can the tattooed, hard-bodied MMA fighter and the beautiful and always steady attorney have in common? A lot more than they bargained for.


This story wrapped itself around my heart as I began reading it. Elle is a lawyer in a small firm and is currently dating William. They met while going to grad school. He’s a lawyer in a larger firm and while these two have a lot in common and sometimes work together on some cases, the sparks just aren’t there. Elle is beginning to wonder about having the relationship continue any longer.


About this time, William wants her to take on a case involving an MMA fighter, Nico Hunter. It’s a good thing there wasn’t a small gas leak in the building at the time these two set eyes on each other. The sparks were flying like one of those 4th of July sparklers. But Nico is ever the gentleman and can read that there is something between William and Elle.


Elle does end the relationship with William and her and Nico do start a new one. But both of them have a past that continues to haunt them. Elle’s has been with her for over 15 years and Nico’s a little over a year. Elle happened to be at the fight that still continues to be a difficult part of Nico’s career. Can these two help each other heal??


This is the first book I’ve read by this author. I found everything, from the characters, the romance, the plot and the sub characters to be well written and thought out. Nico, even though he’s big, hard and tough MMA fighter, he’s one hell of a sweet, romantic male. And Elle will do whatever she can to help him find peace with himself and at the same time he helps her once she reveals what happened in her life all those years ago. I recommend this book to read and cannot wait to read Vinnie’s story. He’s a protégé that Nico has taken under his wings at the gym.


Links to the book:

Vi Keeland is a native New Yorker with three children that occupy most of her free time, which she complains about often, but wouldn't change for the world. She is a bookworm and has been known to read her kindle at stop lights, while styling her hair, cleaning, walking, during sporting events, and frequently while pretending to work. She is a boring attorney by day, and an exciting smut author by night!


Posted by Sugar and Spice Book Reviews at 5:19 AM