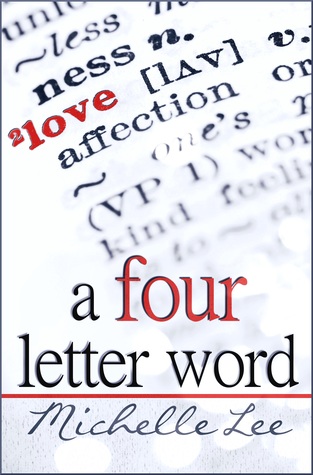 Zoey has had a crush on Evan since they first met in high school, but has never acted on those feelings. She has always felt she wasn’t Evan’s type and their friendship means too much to her to jeopardize. At a Halloween party, Zoey meets Griffin, something Evan isn’t too happy about. Zoey and Griffin’s budding relationship grows into something Zoey never thought she would find, that four letter word, love. When she is ready to marry Griffin, Evan decides to let his true feelings be known. Ultimately, Zoey has to decide, marry the one the currently loves, or be with the one she’s always loved.

I really enjoyed this sweet, romantic story about Zoey and Evan. They have been best friends since they met 12 years ago during their sophmore year of high school. You will read about how they first met & how these two have managed to strictly keep their relationship in the “best friends” category for so long. Will Zoey ever find that four letter word??


Evan isn’t the jerk Zoey was told he was when she first lays eyes on him in high school. He turns out to be the nice guy, the one she feels close to, safe with and could always count on. The more she gets to know him through the years, her feelings change for him. But she doesn’t think he’d share those same feelings, so she’s kept hers locked away. She just settles for having him in her life regardless of how she really feels about him.


I experienced some laugh out loud moments, frustrating moments and ones that made me smile. Evan and Zoey have both had relationships with other people through the years, but they always seemed to be missing something and never lasted long. You will experience more of Zoey’s thoughts in this book rather than Evan’s. I did not think, for one minute, that I would get what I did close to the end of this book. I was taken by surprise. What Michelle Lee gave me was a treat in the way she layed out this storyline & the characters of Zoey and Evan, as well as the sub-characters which help to make this an enjoyable read. It was different, refreshing and I loved discovering an author that is new for me.


I’m looking forward to reading more books by this author.

I stare a little longer than I probably should. Evan is more than perfect in the barely-there loin cloth. His chest is sculpted and chiseled as if made from the finest Italian marble: the ripple of his muscles, the faint outline of a six-pack on his stomach, the v-shaped dip that is just exposed by the low riding material. His arms are slightly flexed; exposing the muscles that working out for hours has created. If he wasn’t Evan, if he wasn’t my best friend, I would probably be licking those arms right about now. After all, I have a weakness for arms—just call me an arm girl.


Michelle Lee lives in the heart of Nascar Country in Concord, North Carolina with her husband and daughter. When she’s not busy working, her days are filled with hanging out with her family and friends, reading, drinking Starbucks, and religiously watching the Food Network.

a Rafflecopter giveaway
Posted by Sugar and Spice Book Reviews at 4:01 AM