Crossing the Line by Kele Moon ~ Blog Tour and Giveaway

Tour Organized by: As the Pages Turn 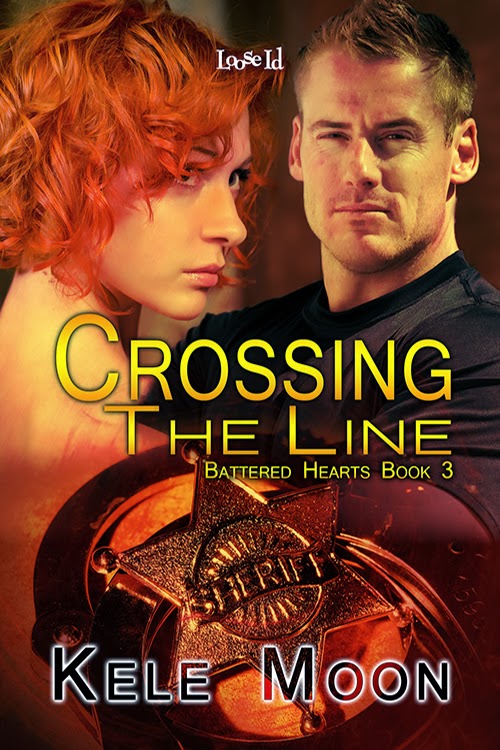 Wyatt Conner is a hard man. A sixth generation sheriff in his hometown of Garnet. A former MMA fighter. His life is about following the rules and making sure everyone else in Garnet follows them too.

Before life hurt him, Wyatt was different. Love had once blinded him to his upbringing and made him defiant against anyone who tried to separate him from the girl he loved. He easily broke laws to ensure her safety.

When she left it destroyed him.

Tabitha knew coming home was a mistake, but family obligation demanded it. She wasn’t expecting to run smack into the love of her life the same day she returned.

Despite the danger, Tabitha is powerless against the wild rush of desire that explodes between them the moment she finds herself in Wyatt’s arms again. She needs a second chance too, but she can't risk Wyatt finally discovering the real reason she left.

Even for another taste of true love.

Tabitha knows her haunted past will destroy both of them if Wyatt finds out. What she suffered through was too terrible and it's the one thing that will have him crossing the line for revenge.

“Let’s talk ’bout you and me instead. Are you going to prom with me?”

“Maybe I need to convince you.” Wyatt leaned down and buried his face in the curve of her neck. His breath was warm, his voice husky. “’Cause I wanna take my girl to one dance before school’s done forever.”

His tongue darted out, licking at the tender skin behind her ear. The rush had Tabitha closing her eyes. She sagged against the door, but he held her there, his strong arms wrapping around her as he pressed, soft reverent kisses against her neck.

“Oh God.” She moaned, knowing he heard the defeat in her voice because he pushed in closer, forcing his powerful body tighter against hers. She threaded her fingers into his hair and held his head there. “Wy.”

She used her hold on his hair to tug him back instead; then she stood on her toes and tilted her head back in an offer he took. She gasped against his lips when he kissed her, hard and possessive, forcing her to part to him when his tongue pushed into her mouth. The pleasure felt like liquid fire that slipped into her veins like a drug.

She never understood her mother’s constant need for the next drink until Wyatt kissed her for the first time on the side of road at the start of ninth grade. Since then she’d been chasing the white dragon every chance she had, regardless of common sense that told her she was falling farther down a black hole that would ruin both of them when they hit bottom.

Her mother had Jack Daniels.

Her brother had drugs.

WOW! This was absolutely an amazing journey!  Kele Moon did an extraordinary job guiding us through one of the most heart wrenching love stories.  This journey begins in the present and then we are lead back to the very beginning when these two people Tabitha and Wyatt meet.  Kele reeled me in with every single word.  There was nothing that was left unturned.  Every character was so well defined and their relationships were AMAZINGLY PERFECT!  So much heart and soul was poured into this book.  You felt it on every.single.page!  I can not say it enough.......PHENOMENAL!

Wyatt.......well he is ALL MAN!!!  He comes from a close nit family and is a sixth generation sheriff.  He is loyal, hard worker and has always been in love with Tabitha.  Tabitha, beautiful and shy.  But unlike Wyatt's family, Tabitha's is totally dysfunctional.  Alcoholic mother and a brother who is a drug dealer.

"Mistakes are always forgivable, if one has the courage to admit them."

Wyatt and Tabitha's story begins in present day with their reunion after she left abruptly 13 years ago.  Tragedy caused Tabitha to up and leave the one man she has always loved and believed was her HERO!  So Tabitha leaves without looking back for fear of the pain and destruction one mistake could cause.  Wyatt, was left with years of hurt and utter loneliness without the one woman he has loved since elementary school.  He never really knew and understood why she left but had his suspicions.

"I've loved you since kindergarten.  I saw that bright red hair across the room and I thought, 'someday I'm gonna marry that girl'."

After thirteen years, can Wyatt convince Tabitha no matter what had happened, that their love is stronger and nothing has changed?  Can Tabitha let go of her co-dependency of her destructive family who have only caused her pain and sorrow?

'Crossing the Line' was a beautiful but sad journey of two people who found each other and grew deeply in love.  We get to experience the beginning of this first love, friendships, family, and the destruction that leads to so much hurt and pain.  This book was surprisingly beautiful!

"Happy Endings If you love life, don't waste time, for time is what life is made up of..."

Congratulations to Kele Moon!  Marvelous job!  Can't wait to read the other books.

A freckle faced, redhead born and raised in Hawaii, Kele Moon has always been a bit of a sore thumb and has come to enjoy the novelty of it. She thrives off pushing the envelope and finding ways to make the impossible work in her story telling. With a mad passion for romance, she adores the art of falling in love. The only rules she believes in is that, in love there are no rules and true love knows no bounds.

​
So obsessed is she with the beauty of romance and the novelty of creating it she’s lost in her own wonder world most of the time. Thankfully she married her own dark, handsome, brooding hero who had infinite patience for her airy ways and attempts to keep her grounded. When she leaves her keys in the refrigerator or her cell phone in the oven he’s usually there to save her from herself. The two of them now reside in Florida with their three beautiful children who make their lives both fun and challenging in equal parts–They wouldn’t have it any other way.

a Rafflecopter giveaway
Posted by Sugar and Spice Book Reviews at 6:29 AM