She was the most beautiful girl I'd ever seen. Pure class. Old money. I never stood a chance... until she broke up with her dickhead of a boyfriend and went off the rails.

Brannon Forrester doesn't expect much from life. He coasts through aimlessly. No real ties. Nothing to hold him back. Hanging out with his best friend, lead singer of a local bar band, he lives for pleasure, out of the spotlight but with all the excess of the band's small-town fame. After all, why should he be good when the only woman he really wants will never give him the time of day?

Then, one night at an after party, Sophie Buchanan walks through the door. In an attempt to throw caution to the wind and dream out loud, she looks to him as a guide to the wild side. As someone who can show her all the excitement and recklessness her world has been missing. He plunges her into a reality of fervent passion... and heartbreaking betrayal.

I think it was the shirt that sealed the deal that night. It seemed to get me laid more often than not, really. Big white block letters that said “Orgasm Donor” across the black fabric that, to be quite honest, was maybe a size too small. Fortunately, I was six feet three inches and had the muscular bulk to carry it off.

I leaned against the counter that separated the open kitchen from the great room. The house was pretty massive, but when you had four guys and a shit ton of equipment to keep handy, you needed a pretty big place. Not very clean, though, which you’d expect considering the band members that lived here. More of a party spot, a place to sleep off the raucous lifestyle. And it was my home away from home when the confines of my own mediocre apartment started feeling a little cramped.

It had been a long week at the garage, difficulty in finding parts, people not wanting to pay their bills, all kinds of shit. My grampa had left me the business that had supported his family for fifty years. Back when I was a teenager, I’d spent enough time with him to know the headache that it entailed, but this week had just really sucked. Maybe he should have left it to my sister. She was the steady one, the responsible one. I was, well… not.

I was only twenty-four, for fucks sake.

So I scanned the room to see who might be willing to slip away and entertain me for the evening. I needed to lose myself. I was pissy and tired, which meant I needed to fight or fuck, and fucking would hurt less in the morning.

Laura was eyeing me from across the room. She wasn’t too bad the first time, but I was a little concerned that she might start getting clingy if I gave her much encouragement. I couldn’t deal with clingy. It was hard to be fun when faced with clingy, and I kinda liked being fun. I didn’t want to be an asshole, but sometimes asshole was the only language clingy could understand.

Looking on through the crowd, it occurred to me that Pauline looked pretty hot tonight. And, bonus, she was a bit more laid back about things. I’d actually done her a couple times, and she was far from clingy, mostly because she sort of seemed to like variety. She’d also done Denny, Justin, Cody, and Drew.

One night, she did Drew and Maggie… together. From what Drew told me, that was kinda how he and Maggie hooked up in the first place. I took a swig of my beer wondering if I was up for her tonight. She was quite adventurous. But then Justin sidled up beside her and proceeded to start sucking at her neck.

I’d shared with Justin once before. Sadly, I barely remembered the girl, which sort of made me feel shitty, but I had been really drunk. I’d just finished off just over half of a bottle of Jack. And it had been dark. The whole experience was a bit of a haze. Not one I was sure I wanted to repeat.

I scoped out the room a bit more. As big as the place was, it was damn near wall-to-wall, and people were still showing up. I saw Lily walk in and considered her for a second. I’d never had her. Cody had, and he seemed to think she was worth another round sometime. She turned back to the door, still open behind her, and motioned for someone to follow her. And then, she walked in.

What in the actual fuck was she doing here?

For a second, I thought I was seeing things. Not only was she here, at a band party, but that preppie dickhead boyfriend wasn’t with her. She looked different. Way different. My first thought was that Lily had likely given her a slutty makeover. Thick black eyeliner, ruby red lips, her blonde hair wild and full and falling in luscious waves around her bare shoulders with bright streaks of pink and purple and blue. Her little strappy shirt displayed the top curves of her breasts and ended just above an incredibly short, tight skirt. A skirt that ended a few good inches above some killer thigh-high boots.

Boldly holding Sophie’s gaze as she locked onto mine, I did the whole smolder thing that generally made panties drop all over town. Her head tilted a bit to the side and, even from a distance, I could see a flush color her cheeks. I could see her breath catch.

She glanced down at my shirt, and for just a moment, her eyes showed a faint hint of shock. She quickly schooled her features, though, masking her expression as Lily murmured something into her ear. Sophie looked over at her pensively, then glanced back in my direction. Lily told her something else which made Sophie shake her head ever so slightly. Then she took a deep breath, grazed her tongue across her lips, and left Lily to weave her way through the crowd.

And I felt a huge surge of blood rush right to my junk.

The closer she got, the harder I got. I’d only ever seen her from a distance, and she was way hotter than I’d thought, even under the thick make-up. I could imagine her plump lips wrapped around my cock. My mouth watered to taste the smooth, buttery skin of those spectacular tits. As she stepped up to me, I realized that her eyes were almost a deep blue-green, not the baby-blue I’d imagined, and I wondered how they’d look all heavy with lust as she rode me to exhaustion. The tousled blonde of her hair framed her heart-shaped face, the multicolored streaks grazing the opalescent bare skin of her shoulders.

She stepped up to me and glanced pointedly back down at my shirt. I prepared myself for a scathing comment. Every time I’d seen her before, she simply oozed class. Money. Style. High society, and, once again, I could only wonder what the fuck she was doing here.

I coolly took a sip of my beer, tipping the bottle back between my thumb and forefinger, and waited for her to talk. Lowering the bottle, I offered it to her. A dare. A test. She hesitated just a second before taking it and, not taking her eyes off mine, sucked it back.

Oh... The way her lips curved around the bottle had my already dirty thoughts turning truly sordid. Those lips would feel awesome wrapped around my dick. With the first taste, she hardly contained the clear indication that she rarely, if ever, drank beer. The tip of her tongue slipped out to catch a stray drop as she tilted the neck of the bottle to touch the letters on my shirt.

“Can you deliver on that promise?” she asked. 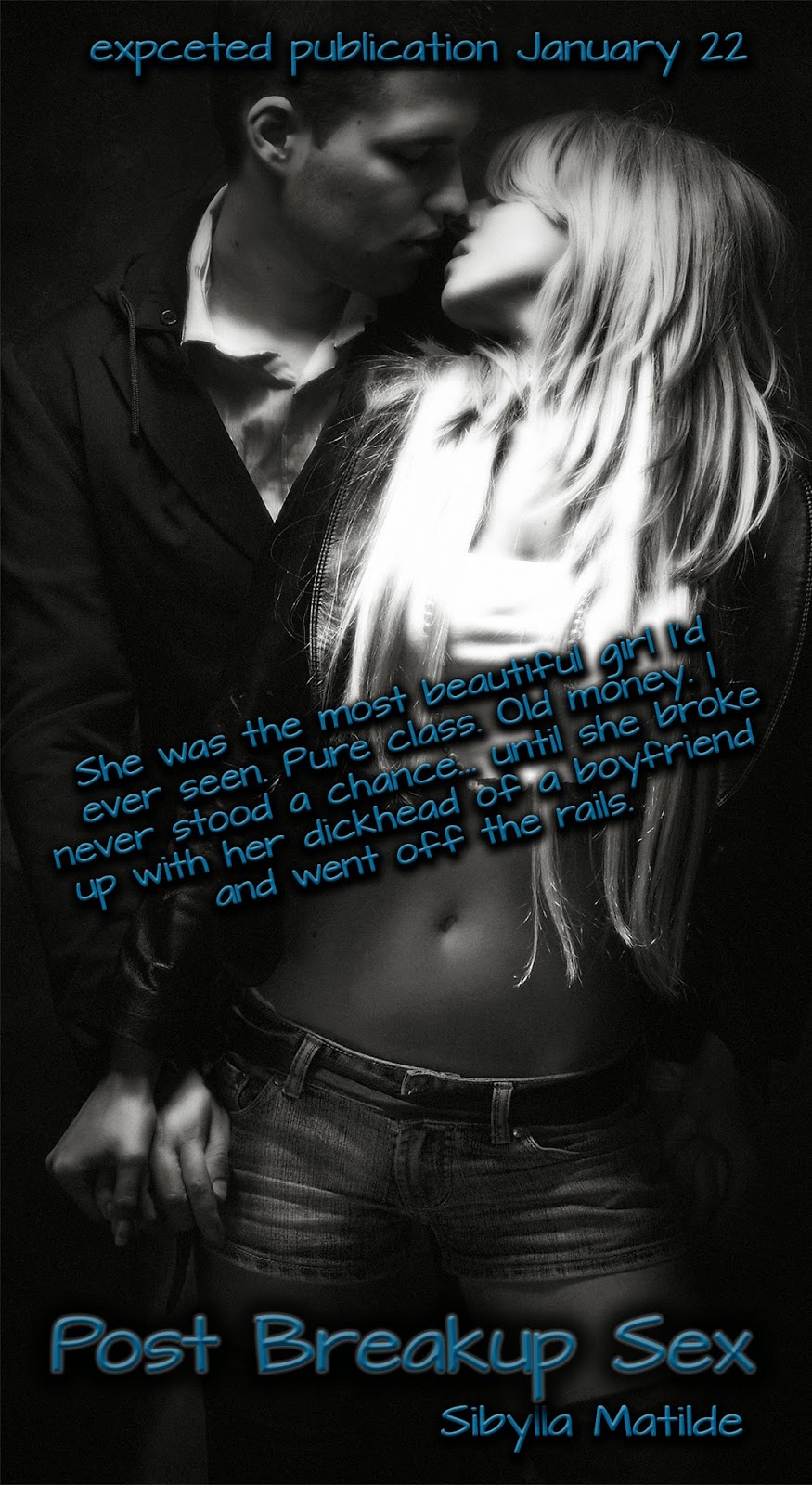 Sibylla Matilde grew up in the mountain valleys of Southwest Montana exploring the dusty Old West gold country on the back of a horse. She attended a two-room schoolhouse beginning in 1st grade & had the same teacher until she changed schools after 7th. Beginning at about age 12, Sibylla discovered historical romance, feeding off of work of Jude Deveraux & Lisa Kleypas. She loves a book that can make the reader run the gamut of emotions, from the sweet glow of new love to gut-wrenching heartache. She is a true romantic & always has stories floating around in her head, living in a fantasyland until she writes them down to free them.

Music is her emotional trigger. Growing up with a Wagnarian-loving mother, Sibylla was raised to treasure music that digs deep into the psyche, drawing out elation, sorrow, grief, desire. The soundtrack to her life includes many genres spanning centuries. She looooooooves Thirty Seconds to Mars (rather obsessively, actually… but, really, how can you NOT be crazy about this guy!? Jared Leto. Shhh. ) & pimps them out to all her friends through Spotify. She also delights in Met Opera HD broadcasts at her local movie theater & hopes (listening Met?) to someday see Diana Damrau reprise her role as Mozart’s Queen of the Night in Die Zauberflöte. Sibylla lives with her husband and hero who saved her from her own calamitous, young-adult self. He makes her laugh daily, even when things are tough. He’s proved to her that love really can heal a shattered soul. In 18 years, they have never had a fight, although argue regularly with their two teenage kids who have, unfortunately, inherited their father’s quick wit (unfortunate as it is a quick wit that Sibylla, herself, definitely does not possess – there is a reason she is a writer & not a stand-up comedian). They live a quiet life with their two weird little rescued Chiweenies. Wait… teenagers & little yap-dogs? OK, maybe not so quiet.

a Rafflecopter giveaway
Posted by Sugar and Spice Book Reviews at 1:48 PM